Robert Smithson - Mapping, and the Concept of the Non-Site 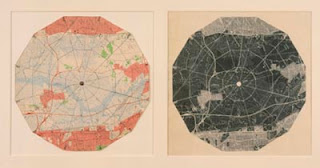 James Cohan Gallery presented an exhibition of work by Robert Smithson titled Mapping Dislocations. The show will feature a selection of maps, drawings and photographs that highlight Smithson's exploration of mapping and its integral relationship to his works defined as "nonsites" and "displacements".
Robert Smithson is most well known for his monumental earthwork Spiral Jetty, 1970, located in the Great Salt Lake, in Utah. While he is most recognized for his earthworks, Smithson also created a large body of work that explored a variety of themes dealing with the post-industrial landscape, entropy, and paradox. His experiments with maps and mapping began in 1966, when he was commissioned to do a project for the Dallas-Fort Worth Regional Airport. Smithson developed an idea for a low-lying site-specific project to be seen from the air. Smithson's use of topographic maps from that project led him to develop a small but focused body of works based on his notions of mapping as fictive sites that pre-figured his sculptures called nonsites.
In 1970, Smithson was interviewed by Paul Cummings and stated, "The nonsite exists as a kind of deep three dimensional abstract map that points to a specific site on the surface of the earth. And that's designated by a kind of mapping procedure… these places are not destinations; they kind of [are] backwaters or fringe areas".
There are two major sculptures on view that illuminate his relationship to mapping. A Nonsite, Pine Barrens, New Jersey, 1967-68, Smithson's first nonsite and Mirrors and Shelly Sand, 1970, a displacement, which will be exhibited for the first time in the United States since 1970. Mirrors and Shelly Sand is comprised of 50 mirrors 1'h x 4' w back to back with shelly sand.
Smithson's early nonsites combined both a map and a container that housed the earth or industrial materials he brought back from the site he had visited. He thought of the nonsites as "an absence of site" referring to the geographical place where he gathered these materials. Smithson wanted to confound the viewer's perception by constructing a dialectic that referred simultaneously to the indoor gallery space where the work is exhibited and the outdoor site from where he collected the material.
Smithson's map works personify his notion of displacement. He accomplished this conceptual displacement by folding maps, cutting maps and reconfiguring them. One example of displacement which typifies Smithson's imagination, is established in a work on exhibit titled Ruin of Map Hipparchus (100 B.C.) in Oswego Lake Quadrangle (1954-55), 1967, in which Smithson collaged an ancient map of the Middle East together with a map of the Pine Barren's area in New Jersey. 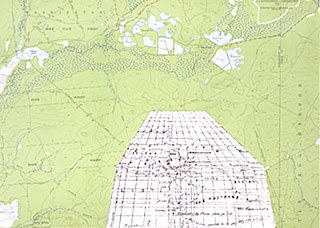 http://www.robertsmithson.com/ex_events/mapping_dislocations01.htm
A Provisional Theory of Non-Sites

By drawing a diagram, a ground plan of a house, a street plan to the location of a site, or a topographic map, one draws a "logical two dimensional picture." A "logical picture" differs from a natural or realistic picture in that it rarely looks like the thing it stands for. It is a two dimensional analogy or metaphor - A is Z.

The Non-Site (an indoor earthwork)* is a three dimensional logical picture that is abstract, yet it represents an actual site in N.J. (The Pine Barrens Plains). It is by this dimensional metaphor that one site can represent another site which does not resemble it - this The Non-Site. To understand this language of sites is to appreciate the metaphor between the syntactical construct and the complex of ideas, letting the former function as a three dimensional picture which doesn't look like a picture. "Expressive art" avoids the problem of logic; therefore it is not truly abstract. A logical intuition can develop in an entirely "new sense of metaphor" free of natural of realistic expressive content. Between the actual site in the Pine Barrens and The Non-Site itself exists a space of metaphoric significance. It could be that "travel" in this space is a vast metaphor. Everything between the two sites could become physical metaphorical material devoid of natural meanings and realistic assumptions. Let us say that one goes on a fictitious trip if one decides to go to the site of the Non-Site. The "trip" becomes invented, devised, artificial; therefore, one might call it a non-trip to a site from a Non-site. Once one arrives at the "airfield", one discovers that it is man-made in the shape of a hexagon, and that I mapped this site in terms of esthetic boundaries rather than political or economic boundaries (31 sub-division-see map).

This little theory is tentative and could be abandoned at any time. Theories like things are also abandoned. That theories are eternal is doubtful. Vanished theories compose the strata of many forgotten books.

*Non-Site #1. Smithson changed the title for this text which was initially "Some Notes on Non-Sites." It has been partially excerpted by Lawrence allowy in "IntroIntroductionrections 1: Options, Milwaukee Art Center, 1979, p. 6 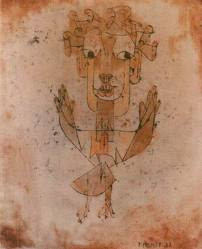